Through ISAR's Billboard Campaign countless motorists throughout the United States are exposed to its spay/neuter message, in partnership with local sponsoring organizations. 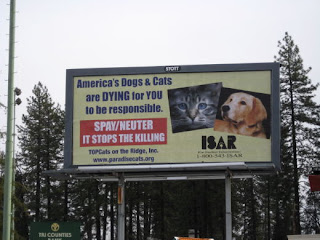 One of ISAR’s major tools in our international effort to educate about the moral and other necessity of spay/neuter of companion animals is our billboard campaign.
The campaign has been a very effective means of drawing attention to dog and cat overpopulation, and the importance of spaying and neutering. As a result of our last campaign, in multiple states throughout the United States public awareness of this important animal rights issue has been heightened. For example, our friends at Spay Austin Coalition purchased three billboards. To view one of them being installed click here.
And in the February issue of Mother Jones magazine, our friends at Paws & Claws Society, Inc. and New Jersey Animal Advocates have come up with a fabulous new idea: getting our huge highway billboards into print media. The folks at Paws & Claws and New Jersey Animal Advocates have turned our billboard into the following paid half-page print advertisement. 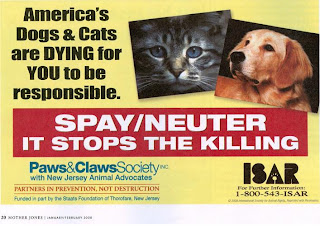 The Billboards measure a standard 10'5"x 22'8" and are printed in full color. The lettering is in bright eye-catching blue and white, with photo images of a yellow dog and a tiger-striped kitten. There is space across the bottom where the sponsoring organization's name and phone number will be imprinted as a resource for concerned individuals.
The cost to an organization is $95 for each billboard, made payable to ISAR. These prices include shipping within the continental United States. Each organization placing an order is responsible for posting its own billboards. Many outdoor advertising agencies are willing to donate space or offer discounts to non-profit organizations. Interested organizations should contact their local outdoor advertising firm for information on the availability of public service announcement space and the cost of labor for posting the artwork panels.
ISAR is currently accepting billboard orders. By ordering all the desired billboards at once, the purchaser benefits from quantity discounted prices. Billboards are printed twice a year, July 15th and December 15th. On these dates, we will compile the orders and submit them to the printing company.
Please contact ISAR for a billboard order form. You may leave a message requesting an order form and a copy of the artwork by calling 1-800-543-ISAR.
In between our "billboard seasons," we encourage humane organizations to follow the lead of Paws & Claws and New Jersey Animal Advocates and use ISAR's billboards as print advertisements.
Posted by ISAR at 1:04 PM

The following editorial appears today at http://www.palmbeachpost.com/. While Palm Beach's recognition of the unwanted dog and cat problem is commendable, its solution--in merely regulating backyard/hobby breeders and giving a pass to commerical breeders--falls far short of what is needed to ameliorate, let alone solve, the immoral and inhumane spectacle of killings year after year. There is only one definitive solution, one we are working tirelessly to achieve: national mandatory spay/neuter, across the board.

"For animal lovers, the spay and neuter law that Palm Beach County commissioners will consider Tuesday is the best step the county can take to cut down on the number of animals it must euthanize every year. So, why are so many self-styled animal lovers so fiercely against it?

"The reason is the ordinance's demand for greater regulation of backyard or "hobby" breeders, pet owners who breed one or two litters per year, producing no more than 20 kittens or puppies. The rules for bigger, commercial breeders would not change. But the hobby breeders, for the first time, would have to register and be subjected to county oversight, meaning inspections and tracking of sales.

"Hobby breeders say they're not the problem. If they love animals as much as they say they do, however, they should support requirements for spaying and neutering most dogs and cats, in an effort to reduce the numbers of unwanted, homeless animals put to death.

"Animal Care and Control Director Dianne Sauve, who is championing the ordinance, attributes the decline to an increase in the number of dogs going from the pound to rescue leagues for adoption. But there are limits to how many dogs that option can save.

"The hobby breeders champion is County Commissioner Bob Kanjian, who considers the ordinance overreaching and ill-defined. He says he would support an ordinance aimed more precisely at the estimated 200,000 dogs and 280,000 cats that are not licensed. Ms. Sauve argues that the ordinance would help her agency to reduce illegal breeding, often involving pit bulls, but she doubts that she can single them out.

"Someone isn't following the rules. The law would make sure that everyone has
to.

"The hobby breeders also argue that the law would force pet owners underground, meaning that fewer animals would be inoculated against rabies. In fact, an e-mail sent by an officer of the Florida Association of Kennel Clubs urged members to remove their addresses from official documents and rent a post office box to escape detection. Doesn't the group's fear of
scrutiny argue for stricter scrutiny?

"While Commissioner Kanjian criticizes Ms. Sauve for failing to document the results of similar laws elsewhere, the law wouldn't be the first in Florida. Monroe County has had a spay-neuter law since 2006 and, coupled with free sterilizations since 2000, shelter admissions in the Upper Keys have dropped 55 percent. Ms. Sauve also cites a similar law in Denver, where euthanasia rates have dropped by 60 percent since that law went into effect in 1995.

"Animal lovers agree that reducing needless deaths is a worthy goal. The spay-neuter ordinance would make sure that the animals they love would not become part of the problem."

As the preeminent national animal rights organization whose major activity is humane education fostering spay/neuter of companion animals, ISAR is proud to announce that the City of North Las Vegas, Nevada, has just adopted, almost verbatim, our Model Mandatory Spay/Neuter Statute (referred to on the municipal level as an “ordinance.”)
Our Model Statute can be found at http://isaronline.org/programs/dog-and-cat-overpopulation/mandatory-spayneuter/.
When comparing the ISAR Model Statute with the North Las Vegas Ordinance the reader will notice that the latter omits three predicate contextual statements found in the former:
· “WHEREAS, many of these cats and dogs are euthanized by shelters, humane societies, and similar organizations; and
· “WHEREAS, euthanizing cats and dogs, except for bona fide medical reasons, is inhumane and abhorrent to the residents of this jurisdiction; and
· “WHEREAS, euthanizing cats and dogs, except for bona fide medical reasons, is not an effective, economical, humane, or ethical, solution to the problem of unwanted cats and dogs ...."
However, as to the ordinance’s prohibitions and other provisions, the North Las Vegas ordinance utilizes the ISAR statute in virtually every respect, using our actual language:
· It requires the spaying and neutering of dogs and cats.
· It contains exemptions for medical reasons and shelters, so long as the latter requires adoptees to be spayed or neutered.
· It provides that offspring of unspayed cats and unneutered dogs be placed with local shelters for adoption.
· It establishes a 120-day period for compliance, after birth of a puppy or kitten.
· It makes violation of the ordinance a misdemeanor.
There is one major difference, however, between the ISAR Model Mandatory Spay/Neuter Statute and the City of Las Vegas ordinance. The former contains no exception for breeders. The latter, alas, does.
Section 6.06.120 D of the ordinance provides that: “The spay/neuter requirement set forth in section 6.16.010 shall not apply to any dog or cat harbored by a person holding a valid Dog or Cat Fanciers Permit, as permitted in sections 6.08.040 of this title.”
In other words, certain breeders get a pass.
Although there is a sad irony here—breeders are a major cause of the overpopulation problem, that the North Las Vegas ordinance seeks to ameliorate—the law as enacted is a giant step in the right direction, in at least two respects.
First, the ordinance represents a municipal judgment that enough is enough, and that the fate of unwanted dogs and cats, and the problems they cause through no fault of their own, is no longer socially acceptable in the City of Las Vegas, Nevada.
Second, other than the breeder exception, conscientious enforcement of the ordinance should help dry up a large number of the city’s strays, and significantly reduce the number of those yet to be born.
The City and its officials deserve the gratitude of all of us who understand the tragedy of dog and cat overpopulation, and the unspoken thanks of those who cannot speak for themselves.
Posted by ISAR at 5:44 PM