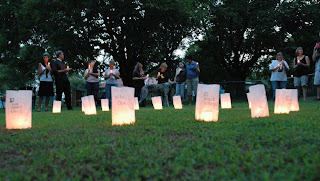 2008 Vigil Observances
ISAR encourages all vigil coordinators to contact us with feedback, photos, and video of their events. Through your comments and suggestions, our vigils will continue to grow. Due to space constraints, we’re not able to acknowledge the many observances held on August 16, 2008. Representative examples follow.

Setting the tone for the evening on August 16th, two guitarists strummed melodies while a soft glow from 25 candles, representing the victims of pet overpopulation in Rogers, AR, struck its own chord with participants during a candlelight vigil held by Murphy Dog Park. More than 70 people gathered to lend their support and promote spay/neuter to reduce needless killing of millions of healthy yet unwanted companion animals each year. Mayor Steve Womack, signed ISAR’s Proclamation declaring August 16, 2008 as International Homeless Animals’ Day.

Fifty-three people participated in a bowling tournament held by the Humane Society of Atchison in Kansas to raise awareness for International Homeless Animals’ Day. Following the tournament, more than 70 people attended a candlelight vigil ceremony which included a blessing of the animals, live music, poems and stories. The guest speaker, a city councilmember, during their ceremony presented ISAR’s Proclamation signed by the mayor of Atchison.
East Hartford Town Green on August 16th was the setting for The Queenie Foundation, Inc.’s second International Homeless Animals’ Day observance in Connecticut. Approximately 75 people attended a blessing of the animals and a meet ‘n greet comprised of 8 rescue/adoption groups, 6 advocacy organizations, and vendors that included a vegan restaurant. Enid Breakstone, Founder and Director of The Queenie Foundation, Inc. said, “The number of organizations tabling at our event always shows the public that homeless animals should be an issue addressed in their communities until it is no longer an issue. Also, having a vegan restaurant shows people that there are really tasty ways to eat without hurting animals.” Ms. Breakstone went on to offer advice for holding a successful vigil first by stressing the importance of teamwork and went on to say, “Invite every rescue/adoption and advocacy organization you can find in your area. The more the public sees that there are several groups in your area, the more it will see that the time for action is yesterday.”

Cats Angels, Inc. SPCA of Fernandina Beach, FL had considerable success this year during its month long commemoration of International Homeless Animals’ Day in August. Fernandina Beach Mayor Bruce Malcolm proclaimed the month of August as International Homeless Animals’ Month. During that time, Cats Angels, Inc. raised over $1300 for their spay/neuter program, performed more than120 spay/neuter surgeries, and succeeded in 70 adoptions that placed shelter animals into new loving homes. At least two dozen walkers armed with spay/neuter signs set out for Cats Angels’ 8th annual two mile walk on August 16th. It concluded with 40 people attending their candlelight vigil. ISAR’s spay/neuter billboard was once again posted this year on busy North Highway 17 promoting the Cats Angels’ vigil event. Beth Hackney, President of Cats Angels, Inc. SPCA, said, “I feel we reached more people this year with our message of the overpopulation problem and the responsible solution to get your animals spayed/neutered.”

SOS Chats of Noiraigue, Switzerland held an information stall in the market of Morges on August 16, 2008. More than 1000 people stopped by SOS Chats’ educational booth which was filled with literature focusing on cat overpopulation, feral cat hunting, and their latest battle against the cat fur trade. Special guest speakers at their event, included local politician Luc Barthassat, a television personality, and a local veterinarian. Miss Switzerland spoke on the importance of spay/neuter, proper animal care, and the horrors of the cat fur trade. Swiss veterinarians were prompted to donate one free spay/neuter surgery to their local shelter in an attempt to help reduce the pet overpopulation epidemic.

Close to a thousand people participated in Wet Nose Animal Rescue’s first official function on their new premises in Kungwini, South Africa by observing International Homeless Animals’ Day 2008. All money raised on this day funded their sterilization program to help combat pet overpopulation. Gold medals were awarded to participants who finished the walk for homeless animals.

Our Deepest Gratitude To Vigil Coordinators
Listed below are some of the countless organizations ISAR would like to thank for their efforts.

Special Thanks
ISAR is grateful for the support from U.S. Governors and Mayors who acknowledged the companion animal overpopulation crisis by signing ISAR’s Proclamation declaring August 16, 2008, as International Homeless Animals’ Day. ISAR would also like to take this opportunity to encourage those elected officials who have not participated in this year’s International Homeless Animals’ Day observance to please consider doing so for next year’s event. ISAR cannot stress enough the importance of having the support of all elected officials in combating pet overpopulation!

ISAR is also grateful to all participating media for helping us to promote International Homeless Animals’ Day this year. ISAR also sincerely appreciates every individual who utilized their local media to educate others on the importance of responsible pet care and the simple solution to the pet overpopulation crisis: spay/neuter. Media coverage included newspaper articles, radio and television interviews, and numerous online resources directing the public to International Homeless Animals’ Day observances in their area.

Organize a Vigil for 2009
As any past vigil coordinator can attest, beginning the planning process early proves indispensable in generating a bigger impact for a successful International Homeless Animals’ Day observance.

ISAR will be glad to welcome back all previous vigil coordinators as well as a host of new ones to participate in International Homeless Animals’ Day 2009. Together we will once again orchestrate a heightened awareness of the plague of pet overpopulation and on a global scale promote the importance of spay/neuter.

Individuals or organizations wishing to take part in ISAR’s International Homeless Animals’ Day 2009 observance on August 15th can receive a free vigil planning packet by submitting a request to ISAR by mail, phone, fax, or email. Our vigil packets include guidelines for organizing a successful vigil event with tips on site selection, suggestions for speakers and vigil events, reaching target audiences, poems, songs, sample press releases, and proclamations are but a few of the items included in our packet. To save on printing costs, vigil packets are only sent upon request.

Together, we will continue to be a voice for the animals and seek to put an end to their suffering.

Please continue to make our efforts possible.
Posted by ISAR at 10:49 AM