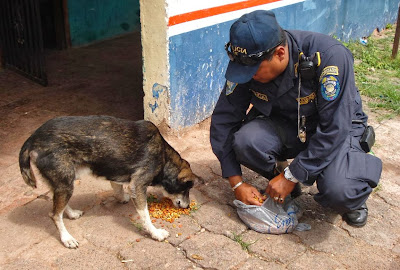 At first glance it might appear that an animal control officer somewhere in the United States is feeding a collarless, and thus apparently homeless, mixed-breed dog.

But if you look closely at the cap of the man, you'll see the letters "LICIA."

This touching event occurred not in the United States, but in Tegucigalpa, Honduras.

The man is not an animal control officer, but a member of the local police force.

For the past 22 years ISAR has been organizing and facilitating INTERNATIONAL HOMELESS ANIMALS' DAY. Over the years, uncountable individuals and organizations have participated in spreading the spay/neuter message throughout the United States and, in recent years, to other countries around the world. For example, this year dedicated animal protection groups and concerned individuals in Belgium, Belize, Bermuda, Bolivia, Canada, Colombia, Ecuador, Fiji, France, Honduras, Hungary, India, Kuwait, Malaysia, Mexico, Nicaragua, Pakistan, Panama, Philippines, Singapore, South Africa, Switzerland, Tanzania, Thailand, and Venezuela joined forces with ISAR in the United States to shed light on the pet overpopulation epidemic.

Following each year's observances we have sought and received feedback about how successful they were--and we continue to want that information, including photos when possible.

Which brings me back to Tegucigalpa, Honduras.

Here, verbatim, is the report of what happened there on International Homeless Animals' Day 2013:

This event had a great impact in the city of Tegucigalpa, the people who live in the community of Suyapa are very poor but when they saw us feeding the stray animal they became closer to ask us about the activity, we explained to them and we heard some positive comments such as "it´s true they probably feel hunger just like us", based on comments like that i think they will treat in a different way those stray animals. Some people evena came to us and asked us if we could give them some food for their dogs, thank God we brought 100 pounds of concentrate.

About the cops, we were surprised because they were supposed to be there for our safety, but when we started to walk they grabbed the bags of food and became active members of the activity! they said that never in their life were a part of an activity that pretends to raise awareness about animal welfare so they gave us their phone numbers so we can call them for our next activity.

In schools, in my opinion we had great results, the kids were so excited with the talks and the draws and colours, of course, the first grade students told me that they would seriously talk to their parents about the way they treat their pets and promised never leave behind their hairy friends. All the talks were imparted in public schools, in Honduras they are full of very poor kids.

AHPRA is an association dedicated to education, the rescues we have made are just a few, but in august we had 4 dogs (3 puppies and their mother) thank God and our events people adopted the 3 puppies and surprisingly we also gave in adoption the mother and she was sterilized that same month.

About the vigil we made it in the city of Comayagua and the mayor let us made it in the central park, only 15 persons attended to the event. But for us that was succesful because it was the first event of this type in a city that ignores completely about animal rights and their welfare.

I'm so sorry that I am answering late, but here is the information. And we will keep observing this day from now on.

Thank you very much Colleen!

It is said that ideas have consequences. Twenty-two years ago ISAR had the idea for International Homeless Animals' Day. A month ago in Honduras, police and others began to see companion animals in a different, more humane, light. For many of them, their attitudes have changed--and the animals will benefit.